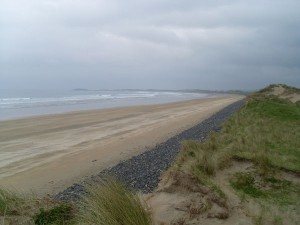 Streedagh Strand is a 3km long beach with dunes behind and a stunning view across the bay to Donegal and out to the Atlantic Ocean.  Benbulben mountain also offers itself as the spectacular scenic backdrop. The strand itself is sutuated just a short drive from 8 Gables and is a popular destination for beach goers, swimmers, surfers and walkers. Is is a fovourite spot for surfers due to the exposed nature of the beach with surf breaks which create ideal surfing conditions throughout the year.

Streedagh is also known througout the world as the site on which 3 ships from the Spanish Armada were wrecked while attempting to shelter from a ferocious Atlantic storm in 1588. The fleet was attempting to flee north around Ireland and Scotland on it’s way back to Spain after losing a battle with the English Naval Fleet at Gravelines. Any surviving sailors that landed on Streedagh beach were quickly killed by English troops garrisoned. Some managed to survive and were aided in their escape by local chieftains. On such survivor was Captain De Cuellar and the account of his escape is an extremely significant piece of social history, one which is celebrated as part of the Celtic Fringe Festival which take place annually in June.

Mullaghmore beach is located just a short drive from 8 Gables in the picturesque village of Mullaghmore. The beach itself is 8km long and also boasts Benbulben as a stunning back drop. The majestic Classiebawn Castle on the headland is also an important part of the identity of Mullaghmore and appears in many photographs of the area.

This rural white sandy beach is protected by extensive dunes and is the destination of sunbathers and swimmers alike while the headland attracts surfers from all over the world to surf the unique giant waves that are generated during Atlantic Storms. 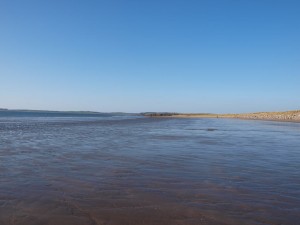 Rosses Point beach is located on the outskirts of the village of Rosses Point approximately 15km from 8 Gables and 8km from Sligo town. The beach is actually 3 seperate beaches of different lengths and features. The first beach which is the shortest of the three is popular among parents with young families. The second beach which is the most popular of the beaches is usually the destination of teenagers and adults alike. This beach is world renowned for its clean sand and gentle waves allowing for safe swimming and paddling for all ages. The third beach is not safe for swimming but is very popular for walkers and horse riding.

Both the first and second beaches are awarded the coveted Blue Flag year after year due to the high quality of the water and are among only 74 beaches throughout the country to receive the accreditation. There is also a lifeguard on duty during the summer months. Ample car parking is also available.