Sligo has a rich history and is home to some very prominent Irish Historic sites, the majority of which are accessible to the public. Some of the sites close during the off season but most are accessible all year round.

Queen Maeve’s Cairn is located on top of Knocknarae Mountain in Strandhill and is the supposed burial place of the legendary “Warrior Queen of Connacht”, Queen Maeve. It is said that her father was King of Connacht before becoming High King of Ireland and that she became ruler of Connacht after him. 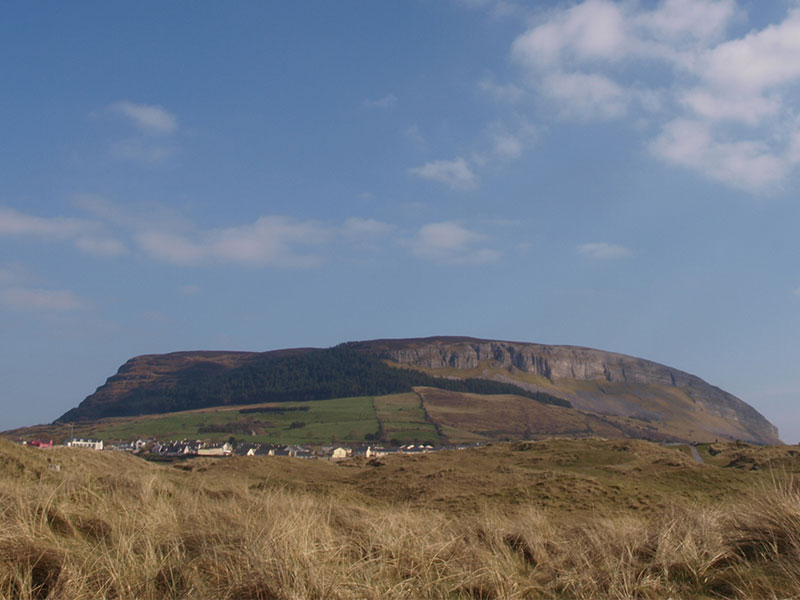 The cairn itself measures 55 metres (180 ft) wide and 10 metres (33 ft) high, making it the second largest such cairn in Ireland and is believed to date to around 3000 BC. It is only one of a number of monuments or tombs on the summit of Knocknarea and in general, the tombs are lined up North-South. Many of the smaller tombs seem to have been small passage tombs and they were severely damaged by the excavations of antiquarians in the 19th century.

There is a small car park at the base of the mountain and it is a short walk to the cairn from there.

Carrowmore is one of the four major passage tomb complexes in Ireland and is located at the geographical centre of the Cúil Irra peninsula in County Sligo, 3 km west of Sligo town. This is one of the largest (in terms of number of monuments) complexes of megalithic tombs in Ireland and is also among the oldest used passage tombs, the earliest depositions approximately 3700 BC. 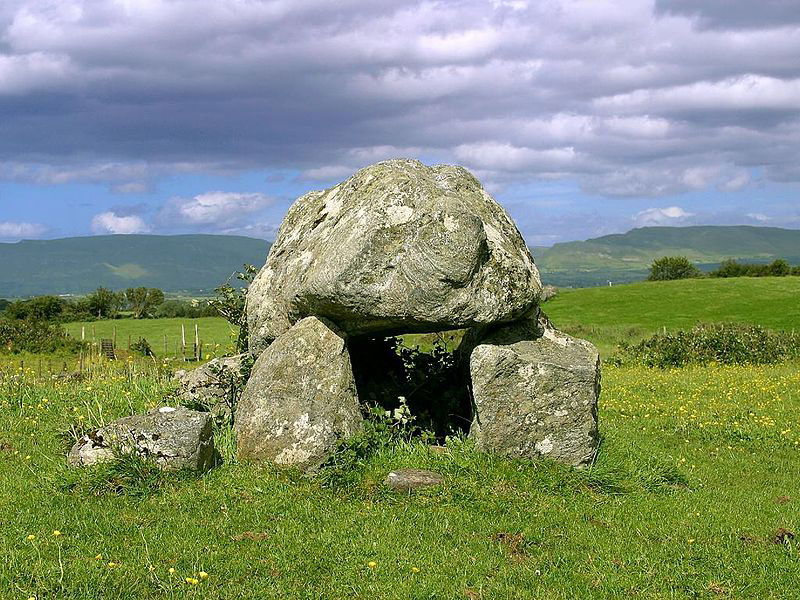 One of 30 monuments at Carrowmore Tombs

Placed on a small plateau at an altitude of between 36.5 and 59 meters above sea level Carrowmore is the focal point of a prehistoric ritual landscape which is dominated by the mountain of Knocknarea to the west with the great cairn of Miosgán Médhbh on top. To the east is Carns Hill with two large cairns overlooking Lough Gill, and along the eastern boundary of the peninsula the Ballygawley Mountains have four passage tombs at their peaks.

30 monuments survive in Carrowmore today. There may have been more monuments in the complex originally, but some fell victim to quarrying and field clearance during the 18th, 19th and early 20th century. The complex is about one kilometre north-south and 600 meters east-west. Most of the sites are “satellite tombs” which surround the largest monument, placed on the high point of the plateau, the cairn (now restored) called Listoghil.

In 1989-90 the State purchased approximately 25 acres, on which stood a number of monuments and a small cottage. The cottage was developed for use as a basic visitor interpretative facility run by the Office of Public Works, this development marked the first stage in developing the Carrowmore archaeological complex for public access. Later land purchases means that most of the site is now under public ownership.

The small farmhouse is close to the R292, approximately 2 kilometres east of Ransboro crossroads. It houses an exhibition, and from March to October provides both guided tours and multi-lingual self-guide options for the Carrowmore megaliths. Admission is €3.00 for adults, and there are discounts for seniors, groups, students and families. Most of the tombs can be accessed from there. The centre is open daily from 10.00 a.m. to 5.00 p.m during the summer.

Located on the south shore of the Maugherow peninsula in north County Sligo over looking Drumcliff bay, sits Lissadell House. The house was built between 1830 and 1835 in the neo-classical Greek revivalist style. The house was designed by architect, Francis Goodwin and constructed of Ballisodare limestone, sourced from the quarry across the bay in Ballisodare. The house was requisitioned by Sir Robert Gore-Booth and he moved into it in 1833 while parts of it were still under construction.

The house itself is a nine-bay, two storey over basement mansion which was actually the last one of it’s kind to be built in Ireland. Built on an estate that was formed from land granted in the early 17th century to the Elizabethan soldier Sir Paul Gore for his services to the English crown during the Nine Years’ War. Originally, the estate would have covered 32,000 acres but over the years this has reduced to 500 acres, which is immediate demense of the house.

It was the childhood home of Irish revolutionary, Constance Gore-Booth, her sister the poet and suffragist, Eva Gore-Booth, and their siblings and was also the sometimes holiday retreat of the world-renowned poet, William Butler Yeats. He made the house famous with the openiong lines of his poem:

“In Memory of Eva Gore-Booth and Con Markiewicz”

The light of evening, Lissadell,
Great windows open to the south,
Two girls in silk kimonos, both
Beautiful, one a gazelle.

The house and it’s estate were bought by the Cassidy-Walsh family in 2003 and they initaited a program of restoration of the house and grounds. Since they purchased the house, the stated aim of new owners Edward Walsh and Constance Cassidy was the restoration of this national treasure as a family home open to visitors, and the regeneration of the flower and pleasure gardens. Already they have reversed the decline and neglect of the previous seventy years and opened both the house and gardens to the public.

World renowned nobel prize winning poet and Irish Senator, William Butler Yeats (W.B. Yeats) is buried in Drumcliff cemetry “Under Bare Ben Bulben’s Head”,  as a line taken from his famous poem states. Yeats fell in love with Sligo during summer visits as a child to the birth place of his mother, Susan (Pollexfen) Yeats, who came from a wealthy local family who owned a milling and shipping business there.

Sligo and its scenic beauty was the inspiration behind some of Yeats’ body of work and there are a number of locations from around the county that featured in his poetry, such as the Lake Isle of Innishfree and of course Drumcliff and Benbulben.

Yeats was awarded the Nobel Prize for Literature in 1923 and led to a significant increase in the sales of his books, as his publishers Macmillan sought to capitalise on the publicity. This increased his notoriety and made him a household name to this day as one of Sligo’s and indeed Ireland’s most famous sons.

He died at the Hôtel Idéal Séjour, in Menton, France, on 28 January 1939 and was buried after a discreet and private funeral at Roquebrune-Cap-Martin. It was his express wish that he be reinterred in Sligo after a period of time. His actual words were ‘If I die bury me up there [at Roquebrune] and then in a year’s time when the newspapers have forgotten me, dig me up and plant me in Sligo’. In September 1948, Yeats’ body was moved to Drumcliff, County Sligo.

His epitaph is taken from the last lines of “Under Ben Bulben”, one of his final poems:

Cast a cold Eye
On Life, on Death.
Horseman, pass by! 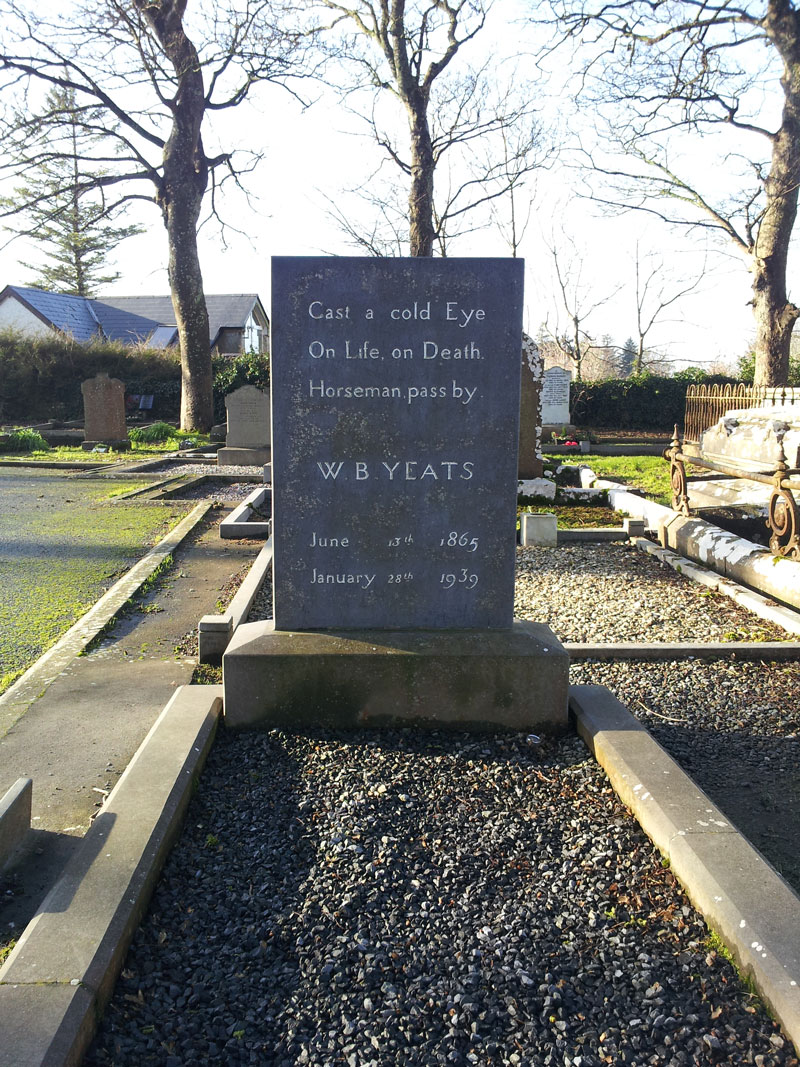 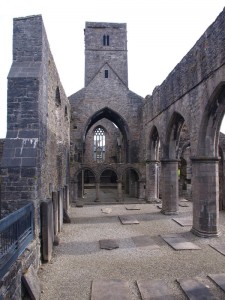 Sligo Abbey is one of only two medieval structures still in existence in Sligo town.  This Dominican Friary, built in 1253 at the behest of Maurice Fitzgerald, the Norman Baron of Offaly has a turbulent past and was ravaged by fire and destroyed on more than one occasion. Known locally as Sligo Abbey, the official title was actually The Convent of the Holy Cross and it was home to the Dominican Friars for over five centuries up until around 1760.

The Abbey was accidentally burned down in 1414 when a candle was left burning carelessly and the building caught fire. It was raided during the Tyrone War in 1595 and damaged further in 1641 during the Ulster Uprising. The friars moved from Abbey Street to High Street in the 1760’s and the building was later restored in the 1850’s.

The site contains a wealth of carvings  including Gothic and Renaissance tomb sculptures, well preserved cloister and the only sculptured 15th century high altar to survive in any Irish monastic church.

The Abbey is open to visitors from early April to mid October from 10am until 6pm. Admission is €4 for adults, €3 for senior citizens, €2 for students and children while a family ticket will cost €10. Groups of up to 40 are catered for and the guided tour usually take approximately 30 minutes 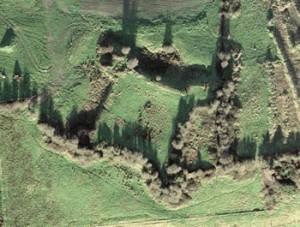 On the summit of this remarkably historical hill there once stood an earthen ringfort called Rath da Bhritog (meaning “ringfort of the two stuttering women” or “ringfort of the two British women”). Most ringforts date from around 600-1000 AD and were enclosed farmsteads. This was modified into an earthen bastion or star-shaped fort, probably in 1646, after Sligo’s fortifications were strengthened following the 1641 rebellion, and became the Green Fort; although its townland name of Rathquarter reflects its ancient origins.

The Green Fort is strategically located on the highest point in the town of Sligo (42m Above Sea Level), and guarded the pass from Connaught to western Ulster, as well as against naval incursions into Sligo harbour. From 1689 to 1691, during the Jacobite and Williamite wars, Sligo and the Green Fort changed hands on a number of occasions. Notable events were Sir Patrick Sarsfield’s recapture of Sligo from the Williamites under Lloyd and a French Huguenot Captain St. Sauveur. Sarfield left Col. Lutrell as commander (Oct 1689) and Lutrell greatly improved the town defences. By mid-1690s Sir Teigue O’Regan, a Jacobite veteran, took over command and used the Green Fort as his key point of the defences of Sligo.

Sir Teigue held the fort for more than a year until September 1691 when it was attacked by 10,000 men under command of Michelburne and Forbes, Earl of Granard. James Wynne fought with Michelburne and in time the Wynnes would own that land, a few hundred metres from where their ancestor fought. Eventually Sir Teigue surrendered on his terms.

The capture of the Green Fort was of so much importance that a medal was struck to commemorate it, along with the towns of Athlone and Galway. The Sligo aspect of the medal depicts the town and the Green Fort majestically on the hill above. At its surrender it was garrisoned by 600 Jacobites and had 18 cannon, 30 barrels of gunpowder as well as stores of all kinds. The fort gradually went out of repair, the town walls and outer defences around the Green Fort have been removed and today only the earthwork ramparts and bastions survive.

The Green Fort as it stands today offer stunning views across Sligo town and across the bay. On a clear day you can see for miles.