Sligo and Donegal offer some of the best fishing to be found in Ireland and even Europe whether its river or sea fishing. There are numerous locations where multiple species can be fished for with some very notable salmon fishing rivers and inland waterways. There are also numerous locations where sea angling charters and excursions are provided and if the mood takes you, you could always fish the Wild Atlantic Way and cast a line directly from the shore line. 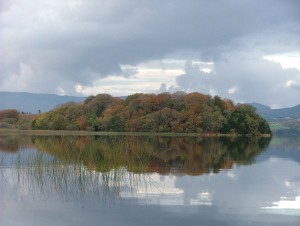 Lough Gill is one of Sligo’s largest lakes and it and one of it’s island were the inspiration for W.B. Yeats’ famous poem, The Lake Isle of Innishfree. The lake itself runs at 5 miles in length and upto a mile wide at its wides point. It is fed by the River Bonnet from its eastern side and drained by the Garavogue River on it western side through Sligo town and into the Atlantic Ocean. The picyuresque lake is surrounded by forests such as Hazelwood, Slish Wood and Dooney Rock. While a large part of the lake is in County Sligo, a portion of it extends into County Leitrim.

Lough Gill is best known as a trout and salmon fishery but it is also home to a broad range of other fish species such as bream and perch. It also has a large population of pike which is a keenly sought after fish by many anglers. Boat hire is available from Sligo Town and from numerous locations around the lake. 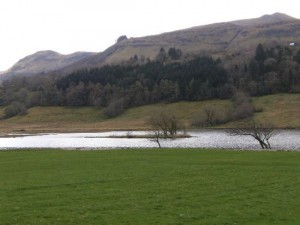 Glencar Lake is a very scenic lake with Benbulben as it’s back drop. The lake itself is 2 miles long and approximately half a mile wide and sits in a deep valley just north of the Sligo to Manorhamilton road. One of the beautiful features of the lake is the spectacular Glencar Waterfall which flows into it from the north.

Fish species found in Glencar lake include the resident stock of small brown trout as well as an excellent run of sea trout and steady flow of salmon, both spring and grilse. According to local anglers, some of the sea trout are in the region of 1.5 pounds and is commonly known to produce some of the largest sea trout in the west of Ireland. The record for the largest trout caught in recent years stands at 6.5 pounds while the best salmon caught tipped the scales at just over 22 pounds.

The Drumcliff river to the west if the lake empties the lake into the Atlantic Ocean and also has a reputation for being an excellent salmon fishing location. There are numerous spots along the course of the river where anglers can fish from the river bank. Both the river and lake yield good fishing all season long. 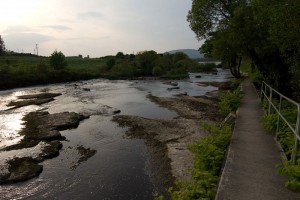 Ballisodare River is one of the best kept secrets of the northwest when it comes to salmon fisheries. Compared to rivers like the Moy it is almost on a par. Whilst being one of the shortest, it is one of the most productive stretches of river in the region. Ballisodare rive boasts three rivers, the Unshin , the Owenmore and the Owenbeg Rivers as its tributaries and it drains an area of 252 square miles of waterways including Templehouse Lake and Lough Arrow. Some of the best fishing can be found in the tidal section of the river which is known locally as “The Butt”. This prime location is situated just below the falls. There is also really good fishing above the falls.

Ballisodare is one of the few rivers that offers consistent and productive fishing throughout the season. Salmon fishing is controlled locally by Ballisodare Fishing Club and it is due to their excellent efforts and conservation methods in tandem with the Fisheries Board that there is a healthy run of spring salmon present in the river from April through until mid June. The grisle run hits it peak in July.

There is also some very good sea trout fishing in the estuary in the evenings during the rising tide. 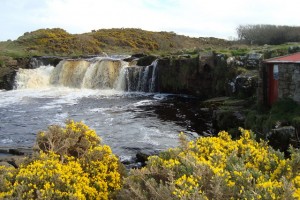 The Bunduff or Duff river runs for a length of 14 miles from the Glenade Valley and meets up with the Ballanaghtrillick River along the way before emptying into Donegal Bay just north of Mullaghmore. While the river’s overall length is 14 miles in total, it’s really only the bottom 3 miles that are the most fished. The river is another one of the local rivers that is extremely productive and prolific for salmon fishing and get a very good run of summer salmon and grilse. Fish start to enter the river at the end of May with the peak of the run in July / August and with good water levels it can be fished right through to the end of September.

The river can fish very well depending on the conditions and it is especially good after heavy rain. Most fishermen choose the deeper pool at the base of the fall close to the sea. Once the water level rises and lets the fish run, there is some good fishing to be found above the falls also. Numbers vary from season to season but anywhere from 300 to 500 salmon can be caught in a season. The river can be fished using all legitimate methods but spinning is not allowed when the water levels are lower. 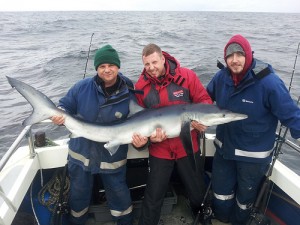 Sligo’s coastline stretches for 121 miles from Mullagmore in the north of the county to Easky in the south and offers every conceivable type of terrain , from superb strands through broad estuaries to rocky shores with off shore reefs, and that’s just the mainland. There are also numerous island both close to the shore and beyond in the deeper waters of the Atlantic Ocean.

There are numerous boat charters and fully equipped licenced boats for deep sea fishing dotted around the coastline where experienced local skippers, familiar with the species and hot spots of the area will guide you to the best fishing. There is a huge variety of fish available all year round for the bottom fishing enthusiast and there are several reefs with an abundance of pollock and wrasse. Blue shark can also be fished for from some of the more specialized charters. Group and individual rates for full day, half day and evening trips are available also from selected charters and most charters provide equipment for hire on the day. 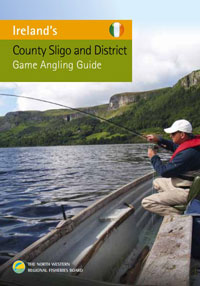